Ahead of the leader 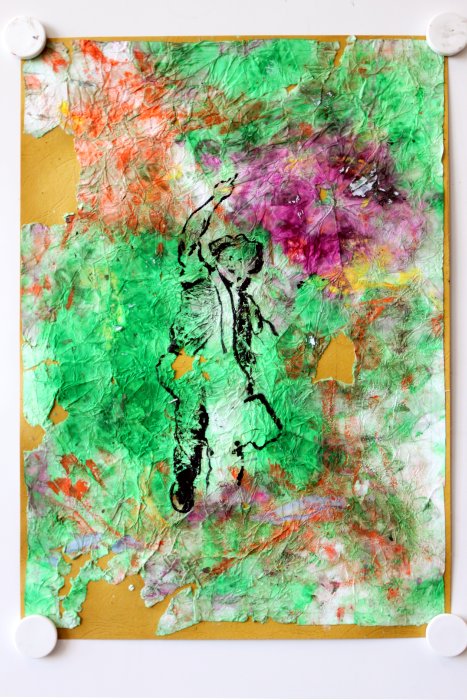 Click image for large size, or read on for a brief and interesting discussion with some food for thought ...

The quote mentioned above is the central "incomplete" character, painted using a black outline to provide a transparent "ghost-like" appearance. This qoute is from a 1830 painting by Eugène Delacroix, titled "La Liberté guidant le peuple" (English: "(The) Liberty Leading the People"). This painting, in turn, was allegedly the original source of inspiration for the (perhaps more well-known) monument "Liberty Enlightening the World" (known as "Statue of Liberty") in New York, USA.

In the Delacroix painting, "Liberty" is painted as a woman ("Marianne") holding a flag. However, if you examine this painting closely you will see that "Liberty" is not leading at all. She is at least one step behind the character quoted here.

This "little boy" character is actually leading "Liberty" herself. So, what is the significance here? To cut a long story short, he is "The Idea". The idea always comes first. I should add that this is my personal interpretation of the role of this character; other observers may have quite different opinions.

In the Delacroix painting the idea is already established, and has even gained traction. In this painting, however, we are at a far earlier stage; the emergence of the idea. The "unfinished" or "ghost-like" painting style of my painting above should reflect this fact when compared to the "finished" or "realistic" Delacroix character.

I believe it safe to say that all progress must lead, not to further progress, but finally to the negation of progress, a return to the point of departure.
"The Journal of Eugene Delacroix : A Selection (1980), p 97"

A torch, such as eg. the one from the "Statue of Liberty", is a symbol of progress. There is no torch in my painting and no "progress" in the conventional sense, only emergence: this is a fully organic or "natural" process "from the inside and out" - as such it is not "guided" by anything external (although it does incorporate and reflect the surroundings; the overall conditions for the idea including the reason for it being born). This may be seen as an image of evolution which may or may not "have been" or "turn into" revolution at some previous/later point.

Here, we are at the "point of departure", be it in past or in future. Also there is no "Liberty", in stead there is freedom -- almost total freedom. The idea is emerging (being born) it has not yet been contaminated or held hostage to serve some agenda or other. In the Delacroix painting this character holds a handgun in his right hand. In my painting the gun has been replaced by a raised finger. The idea does not act, it is an idea only.

The difference between "Liberty" and freedom is that "Liberty" has a certain intent/direction/plan and only allows certain things - while freedom has no intent, no prohibitions or limitations. In this way "Liberty" has only a limited set of routes for "progress" (or, "degeneration" for that matter) while freedom can take any route.

clsc.dk : Painting · Ahead of the leader