Triple tragedy of the Currach

Graphics / Dry Point: A common sight on specific Irish isles no later than 100 years ago: 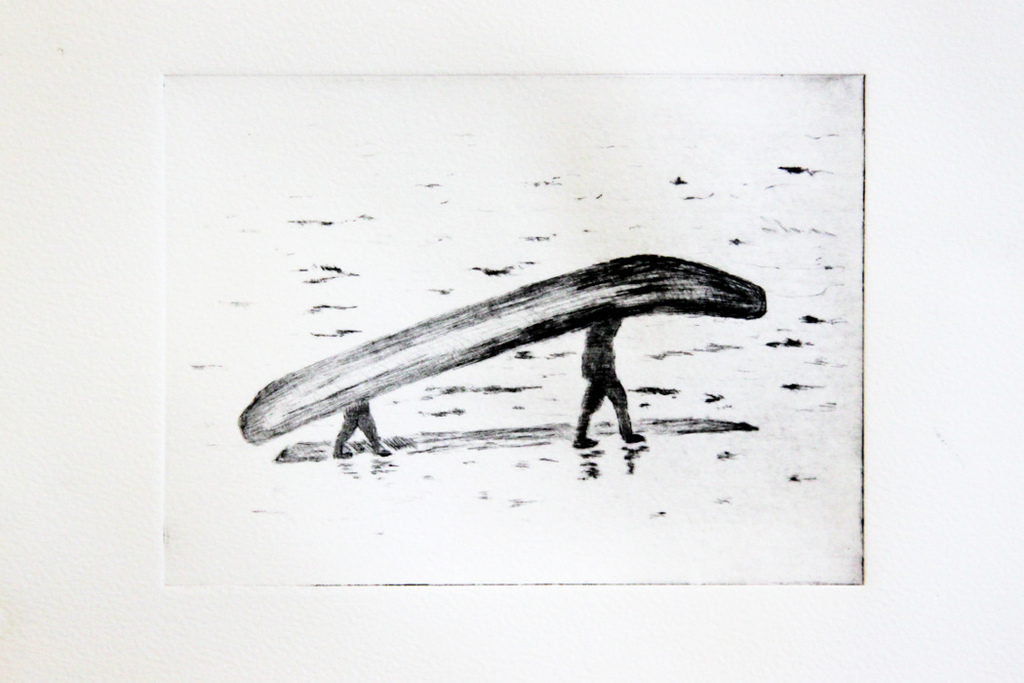 Read on for information / tragedy...

This boat, carried by two men -- or a man and a boy -- is an Irish type, called a Currach. It was traditionally made using hide on a lightweight wooden skeleton (called a "frame"), just like the North Amerian Indian canoe, or the Inuit kayak.

The currachs were made differently to accomodate local preferences; the one above has the characteristic shape of boats from the Inishkea Islands (Goose Islands) in the northern Irish Connacht province. These islands lie off the coast of the Mullet peninsula, barony of Erris in County Mayo. The islands are surrounded by the Atlantic Ocean.

Tragically, the Inishkea Islands were abandoned and depopulated in 1927, following an accident where 10 of the young people from the islands drowned (with their currachs) during a storm. That ended a period of population lasting 5,000 years, and that is why it can be said with certainty that the above sight has not occured in around 100 years.

Also, it seems there are very few currach builders left in Ireland, so the probability that they would choose to use their limited time to build a currach for a deserted area with no customers is pretty low. Hence, the likelihood of just seeing an extant Inishkea currach, let alone a functional one, is very close to zero.

That said, the sea-faring properties of this particular currach seems to be different than that of other boat models I have seen. I am no specialist in such matters but it seems obvious to me that the elevated bow (boats' "nose" or front) has to break waves in a very specific fashion, probably allowing safe sailing in waters and/or conditions that sailors of other boat types would find it difficult or impossible to navigate.

My personal laymens' guess would be that a higer bow implies that greater waves can be faced (at least coming in from the front), and maybe allowing a higher speed than otherwise, hence increasing the area of operation (with otherwise unhanged ressources, higher speed will allow a vessel to cover a larger area than a slower one). High waves may of course be expected in The Atlantic. Hence the effect of this construction principle may be somewhat similar to that of the bulbous bow used today on large ships. In laymens terms this vessel would probably be able to take relatively long journeys on the big sea (the Atlantic Ocean) and back, even in relatively rough weather - and even when having only one or two people aboard!

It seems, then, that the fatal nature of the storm of 1927 was not due to the hard winds as such, that is; not only that. The total unexpectedness of the storm may have had a higher influence on the number of casualties than the severity of the storm itself. By all accounts this was a real storm, very violent and ferocious even by the high Atlantic Ocean standards ... but the currach -- the Inishkea Currach, that is -- seems to have been built to handle this (some fishers did make it back ashore, some even "blown ashore" by the wind, including boat).

So, the tragedy here is actually threefold: First, innocent people die, and a whole society suffers from this. Second, an area inhabitated for 5,000 years is abandoned. Third, a vessel with unique properties is (forever?) lost to mankind.

As no live samples were (are!) found, neither of the Inishkea Currach nor of their operators, I had to base the Dry Point engraving on a reference photo from an antiquated encyclopaedia (the title and publishing details of which I have unfortunately forgotten). However, the photo most certainly was in the public domain seeing as it was around 100 years old.