Painting/striped: Conceptual. This one has an individual topic/subject/idea. Contemporay per se, but not neccesarily so as the concept seems to be "evergreen". 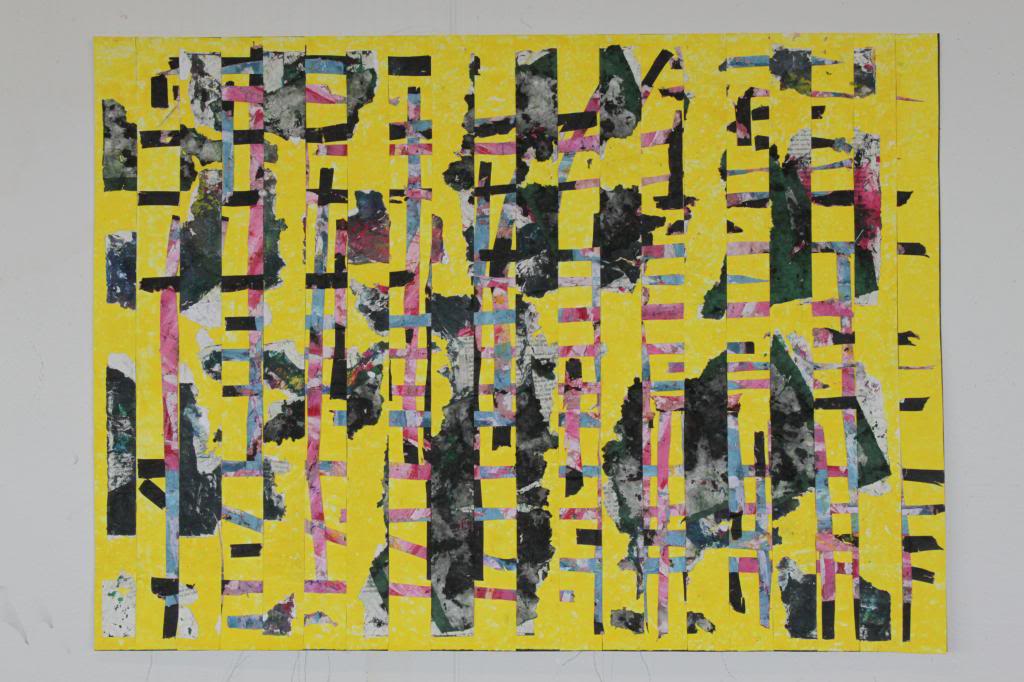 This painting is intended to be an unpleasant viewing experience. Read on for explanation and process photos ...

Unfortunately I do not recall neither title nor author of the book that was used in this painting. The book is significant, though. It was given to me in a slightly damaged state but perfectly legible. So, I read it, and this gave the inspiration as well as some "raw material" for this painting.

The book is about the aftermath of WWII, specifically the efforts to legally persecute and punish a former KZ-camp "doctor" responsible for several crimes including molesting and murder of children. As I recall the persons featured in the book are almost exclusively Jewish, giving the non-Jewish reader a glimpse into the Jewish culture and mentality.

The title (which is also significant) is the saying "Home, Sweet Home" with the English word "Home" replaced by the Sanskrit word "Saṃsāra". This word means something akin to "wandering the world", or "world of wandering" - the verbatim meaning being insignificant relative to this painting (although in context it may invoke the image/concept of "The Wandering Jew": this image/concept has not been considered as part of the painting process either, so while it could be related it could be so only as an afterthought.)

To explain a brief digression is required:

Relative to this painting the word "Samsara" is to be understood as a cycle of births, deaths, and rebirths into the very same Earthly domain - a continuous chain directed by a phenomenon known as "The Law of Cause and Effect". Samsara is a Buddhist/Jain/Hindu/Vedic concept, not a Jewish one. It is relevant to note that in (eg Buddhist) teachings the chain of rebirths is not limited spatially to "Earth-as-we-know-it", you may be reborn in other types of "worlds" as well. However, to obtain this shift in spatiality you have to undergo some specific, say "personal development" first.

This circular movement brings with it the very same thing that is the cause of the movement itself: Suffering. The cause of this suffering is twofold: One part is attachment, the other part is impermanence. The patient reader (and everyone else here on Earth, regardless of religion etc) is always in a state of attachment to this or that (specifically a whole lot of "thises" and "thats" simultaneously). However, none of those "thises" or "thats" will last as nothing on Earth is permanent. Some day they are no more, and that loss fuels the suffering mentioned above.

Unless, of course, you manage to rid yourself of all attachments in which case there will be no suffering at the loss of those "this-and-thats" that you are no longer attached to. This is not intended to be a crash course on Vedic philosophy, so I will not elaborate here. The intention was to explain the key word "Samsara" from the title.

This painting is "real", meaning that it is physically present in this Earthly domain. You can touch it. So, while Samsara as such is not limited to this world, the painting is. Literally and intentionally limited. So, relative to this painting the cycle of wandering-the-Earth-while-suffering seems to just go on and on in perpetuity. There is no development, no progress to "higher states of being" (and, no decline to "lower states of being" either). Only Earthly affairs ad nauseam et ad infinitum. It is a painting frozen in time - although measured in human time that "moment" has now lasted several generations.

Enter "Sweet Home". The title imples an attachment to (even love- and pride of) suffering itself.

Oh, and: Caution! All elements of this painting have been selected, collected, and composed wih the specific aim of producing a rather unpleasant viewing experience. This is not a side effect, it is the very purpose. For some the effect may be neglible, for others it may be strong. That said it may appear differently to you especially if you've seen the painting a few times already -- or if you've watched it for a very short time and/or with very little attention.

Past viewers have expressed feelings of uneasiness and discomfort, unsolicited. This effect is intentional.

I have to add that while the inspiration for this painting came from the Jewish culture/people the concept of Samsara and the lines of thought outlined could apply to any (type of) people/culture, and any age. The "Law of Cause and Effect" does not discriminate.