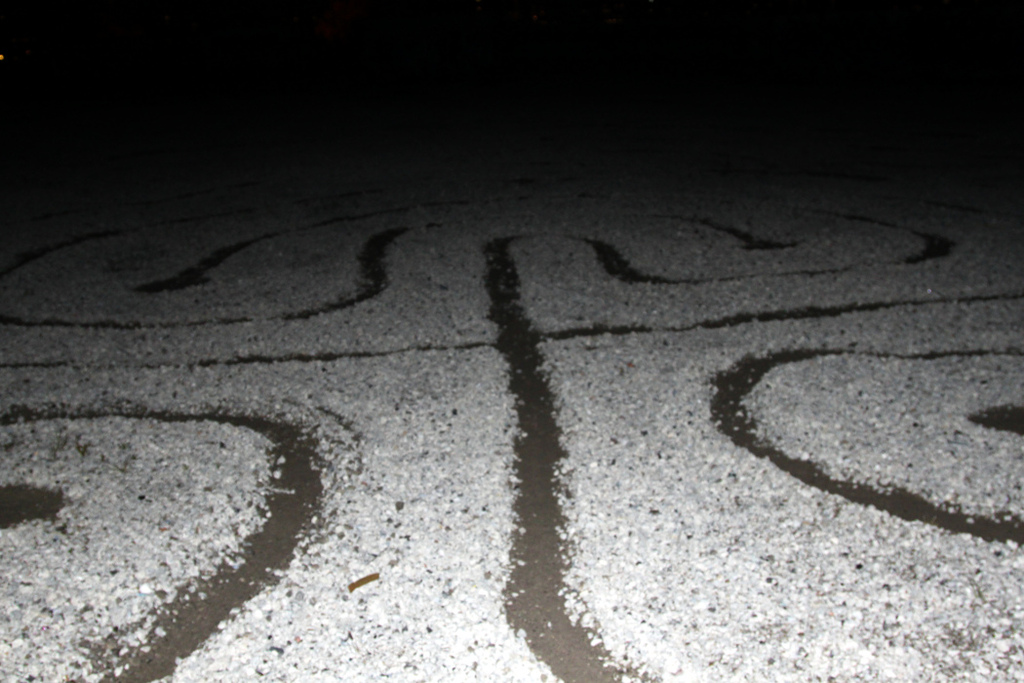 Read on for a lot of information, plus daylight photo in full size.

First, this is not a Christian symbol. It predates Christianity, but it is being appropriated by Christians on every occasion that they can think of due to the centre of "the symbol" being two crossed lines. Crossed lines are generally not Christian crosses, but some Christians tend to think that any construct featuring a pair of crossed lines is a symbol of their belief system.

This is an ancient type of labyrinth, posssibly (one of) the very first type(s). Popularly known as a Troy Town (more info, even more info). Around 18 meters in diameter it is quite big compared to the other material on this site.

Popular/in fashion in Scandinavia and elsewhere in Europe latest around the centuries 1200-1400 as a stone- or turf construction, mostly these were made in public spaces, and near water. The tradition dates back to nobody-knows-when. It seems to be the case that they would be constructed using stones if stones were in ample supply (eg. Gothland, Finland, Sapmì, Kola Peninsula), and where stones were scarce grass turf or earth would be used (eg. Denmark, England, Iceland). The Romans of course used mosaic tiles, the Egyptians allegedly constructed colossal stonework, and all the way back in neolithic times petroglyphs were made. So, the labyrinth was always adapted to the customs of time and place, as well as the materials at hand.

Some of the Scandinavian stone-labyrinths (examples: 1, 2, 3) may be even older, possibly centuries or millenia older - Science does not provide a method for dating the movement of non-organic objects (stones) from one location to another. Some seals wih labyrinth-like patterns from the meditteranean area (Egypt) allegedly date back to 3,000 BCE [1].

This particular design can be seen on a variety of items throughout antiquity. The oldest extant appearance of a labyrinth of this type seems to be this clay tablet from around 1,200 BCE. Here's a selection of more recent designs on coins from the island of Knossos: 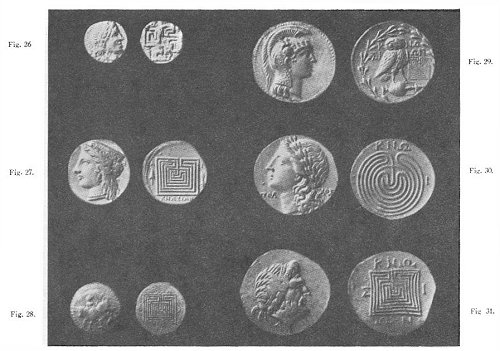 It's also found in multiple other locations, older as well as younger. The labyrinth on some of the Knossos coins is square with straight lines (eg. Fig. 27, 31) while that of the Troy Town above is circular with curved lines, like Fig. 30 (as per Scandinavian tradition), but the path design is exactly the same.

Walking the labyrinth you will follow a path left-to-right alternating with right-to-left: the movement of a pendulum swinging, or that roughly tracing the bi-directional swing of a double-headed axe ("Labrys"). Allegedly the double-headed axe was a symbol of the meditteranean god Zeus, just like the double-headed hammer ("Mjöllnir" - which, like a boomerang, would return when throwed; in effect having a double bi-directional nature) was a symbol of the Scandinavian god Thor (those two gods had other similarities as well).

That said, there is (AFAIK) no evidence, research or even myth linking the concept of a labyrinth (or even specific labyrinth( type)s) to either of these gods. It seems that the labyrinths appear in societies where either of these gods also appear, but that does not necessarily imply a relation other than similar geographical (and/or temporal) scope. The head on the obverse of coin Fig. 30 is that of the god Apollo.

Yet another interpretation of "the shape of the walk" could be eg. that of the crescent moon, that of the sun in the sky, or that of the two horns of a bull (some mediterranean labyrinths are linked to various bull cults/myths, the most well-known being that of the Minotaur, Asterion).

It took a few hours to construct the labyrinth, and by that time day had turned to night (Northern Hemisphere; it's mostly dark this time of year), so here is a daylight photo. There are two people on the photo (top left) so that you can get an impression of the size (the wall is around 4.5 meters tall): 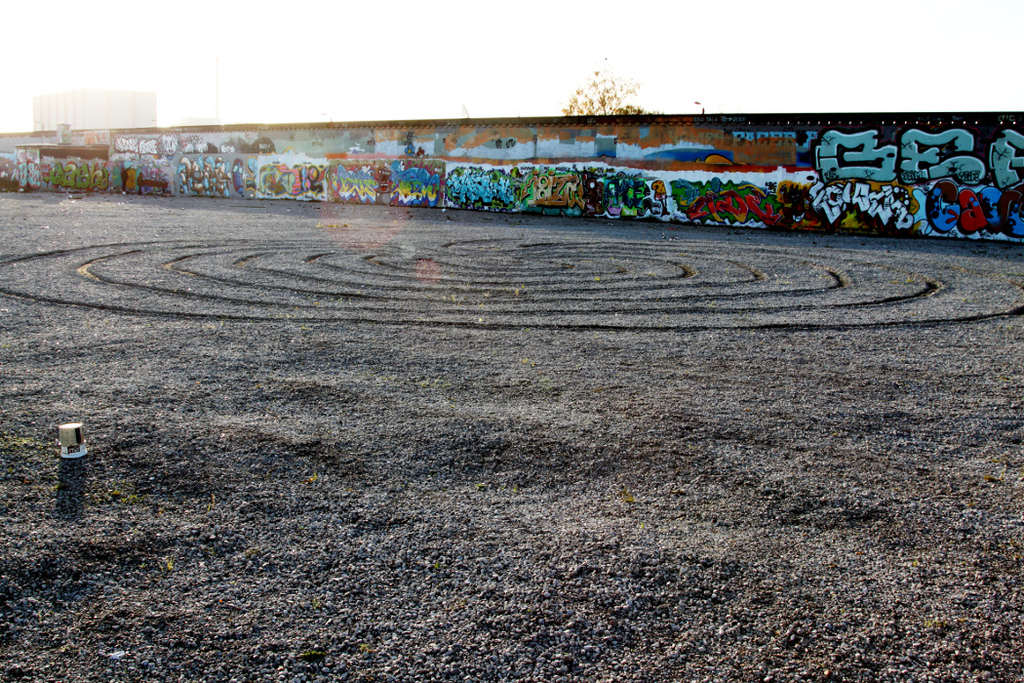