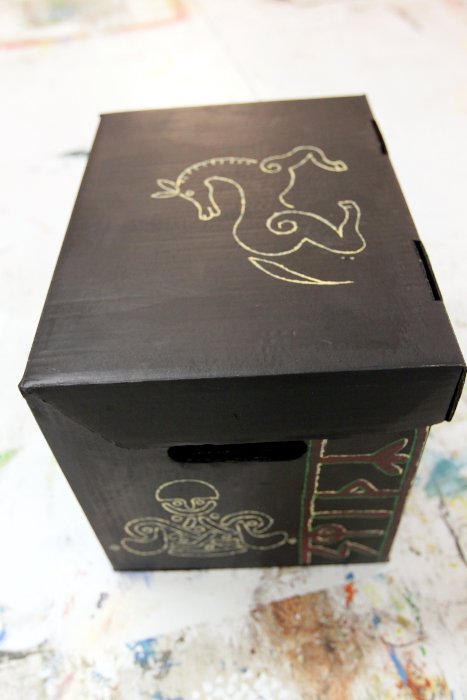 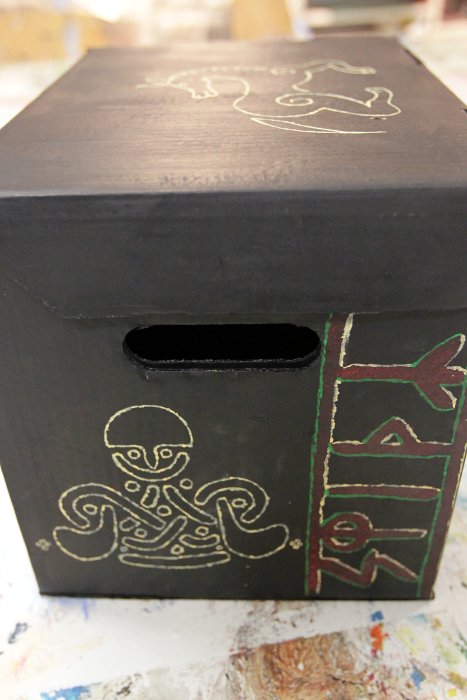 Like so much else, there is more to this than meets the eye. Read on...

This box is a product of modern "use once and throw away" culture and mass production. It is actually a quite sturdy box and with applied paint even more so. Still, in popular conception a cardboard box is just a few small steps away from litter.

The decoration is work-in-progress.

The decoration I've chosen to apply has its roots in Iron Age culture 1,500 years ago, and earlier. Products of that time were craft products intended for use, repair, and recirculation for as long time as possible. When such products had to be discarded eventually they would simply decay leaving little to no trace at all.

Left "in nature" un-decorated this box would probably decay just like an Iron Age product. However, after applying acrylic paint (the decoration) this is no longer so.

The decoration is as follows, so far:

Top/lid: A horse, with head turned backwards. This is a motif/symbol of unknown origin and age. It is found on archaeological artifacts from many cultures across the globe. Sometimes as horse, sometimes as deer, as tiger, or as other animals probably depending on local preferences and fauna. It is known from petroglyphs as far back as the Stone Age.

While the inspiration is from archaeology this particular design is my own creation.

Side: Two parts, a rune part (Norse alphabet writing), and a character.

(1) The rune writing is read from bottom to top. In Latin letters it spells "s m i th R" and it is pronounced similar to the English "smith" (the "R" marks a special Norse rune character equal to the preposition "a/the" in English. This character is not found in the Latin alphabet). The rune writing means "a/the smith", the collective name for the craft professions (they were all "smiths" regardless if they worked iron or wood, decoration or verbiage. Cf eg the contemporary Danish phrase "rhyme smith" for an author of lyrics for music).

So, this is a "name tag". My last name means smith and my "profession" may also be called smith: I create stuff.

(2) The character is from archaeology. It is part of a decoration on a belt buckle found on the island of Gotland. The origin (place of manufacture) of the belt buckle is unknown. It has been dated to ~800 CE. On the reference photo I used the belt buckle was partially damaged making it hard to identify all details, this is why this character is only partial here.

The belt buckle character photo was found in the book "People, Gods, and Masks in Nordic Iron Age Art" by Asger Jorn (title was in Danish but I translated for this post). Jorn hypotesizes that -- like the horse -- this is also a worldwide multi-cultural reference/symbol dating back way before the Iron Age: That of "the ancestor sitting-with-folded-legs".

While Jorn may well have been right (and he probably was), to me this is clearly a character (make that "an ancestor-character" if you please) engaged in some activity. It is a portrait of an activity, not of a specific person. Something is "done" here, perhaps being created. This activity, regardless of nature, has a name: smithing

A rather small and insignificant box of no particular monetary value. If not for the decoration it could easily be taken for random litter.

I regularly use various discarded materials and materials of no monetary value in my work. It is interesting how "something of no apparent value" may change into "something in its own right".