Geometry/patterns: Learning from the masters: 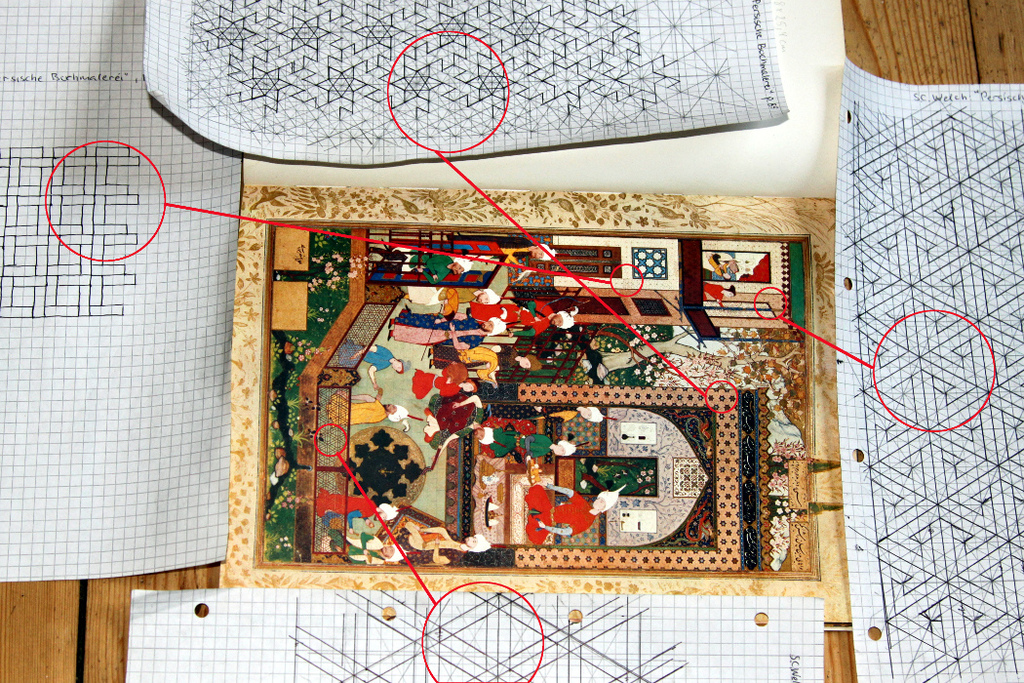 Read on for information...

These patterns are from Stuart Cary Welch: "Persische Buchmalerei" (Prestel 1976, ISBN 3 7913 0388 0), p. 85. This particular painting is from a hand painted book from Persia (Iran) in the 16th century, the painter is believed to have been Mirza 'Ali.

These are not only very intricate patterns (well,some more than others), they are also done in miniature scale! The original painting measures 254x368 mm which is only slightly larger than the A4 size papers on the photo. Even though the reproduction is good, you still need good eyesight to discern the actual patterns ... and as can be seen from the study sheets surrounding the book, you need lots of guiding lines in order to construct some of these patterns.

As with most other Persian patterns these are built using multiples of 30° angles using these to construct equilateral triangles, hexagons, and from there even more guiding lines ... and finally the actual pattern outline. This implies that -- insofar as the original painter would need to use guiding lines for his work -- the original guiding lines for some of these patterns would have to be in the scale of tenths of a millimeter or narrower still!

How you would practically go about painting these I don't know. I know there is such a thing as "single-hair painting", in which a single hair is used in stead of a brush. Perhaps that is the solution, but you still need at least an angle measure and a slide rule with the required precision (and a powerful looking glass) - neither of these tools, I suppose, were common everyday objects around 1540.

My working theory is that the painter would create an outline in large format, and then scale it down and project it onto the surface using optics. However, unless the painter could create the outline on a transparent medium that would have to be pretty advanced optics only invented in the western world in the modern ages (akin to an inversed slideshow projetor), plus I have incomplete knowledge as to the use of optics in Persia in medieval times, so for now that remains speculation.

Bonus info: The trained eye will see that the main scene of the original painting is actually inscribed in a hexagon that intersect the right hand frame of the painting at the point where the two rightmost borders of the hexagon would start. The importance of the hexagon is derived from the 60 degree angle, which is related to the sexagesimal numeral system inherited from the ancient Babylonians, who in turn go it from the Sumerians who used it somewhere around 3000BCE.