Mixed/drawing: Four more postcards:
Updated 2019-12-09: Edited/added some thoughts / an initial interpretation of this motif, and digressed a bit on the -- probably unrelated -- Gundestrup Cauldron... 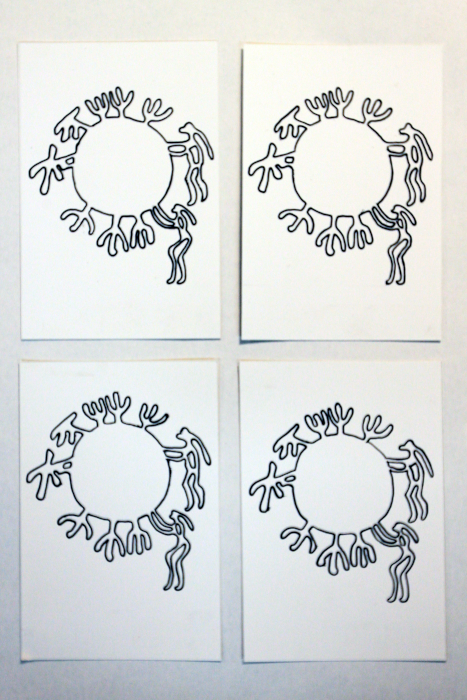 The (2x) three trees may have the extra function of illustrating the use of points on opposite sides of a circle in order to identify the solstices and the equinoxes (cf "henges" and ancient monuments in general). This petroglyph could be aligned so that a line between each of the middle trees will be aligned with the Equinox sun (east-west). Lines between the other trees, pairwise, would then mark sunrise/sunset at summer and winter solstice (solstice lines should cross from left top to right bottom etc).

These are just thoughts and speculation, I do not know if this is physically the case at Aspeberget or even possible there (also, there's a thing called "Precession of the Equinoxes" that could influence observed alignment and/or perhaps; help date the petroglyph accurately)

Please take a close look at the figure to the left on this panel from the Gundestrup Cauldron, especially the hairstyle/headgear...

Here and now I will not venture into an interpretation of these motifs. It seems the history/myth that explains the Gundestrup motif(s) has been lost, and also that this myth (and hence, the cauldron) is just not Norse.

Then again.... as for the figure left lowering another figure into something that looks like a cauldron....well, I can't help seeing it as an illustration of the use of the cauldron itself; perhaps for baptisement (it is rather big, and it's no good for cooking). As for the dog, I have no clue.

(Note on origin: The shields carried bottom section are likely Gaelic/Celtic (and shaped to fit cavalry), not Norse (ours were round, shaped for infantry). The musical instruments right are the "Carnyx", ie. Gaelic/Celtic. The equivalent Norse instrument would be the "Lur" which is very different in design. The horse riding characters (top) have "sculptures" mounted on top of their helmets which is a Gaelic/Celtic thing, not Norse. The horses are too tall and elegant to be of the Norse variety (ours were short and muscular). Also, the artistic execution of the motifs, the "style", is not paralleled in any Norse craft or jewellery from that period that I am aware of. Last, soldiers without axes are simply not Norse. So, clearly the cauldron is "not made here".)

(The plant lying in the middle is somewhat similar to a stylized Digitalis but then it could also be a Bluebell, Gladiolus, or another flowering plant. If it is a tree I am sure that such a tree does not grow in Scandinavia)

A cauldron may be moved vast distances, so it could be from anywhere on the globe, but Aspeberget is solid bedrock and has not moved much since at least the last Ice Age. We do not know when the petroglyph was engraved there (it could be ancient, it could be recent). Still... this and the cauldron seem to have a hairdo in common? (as the only thing, afaik)

Later in history we find this "hairdo" appearing as a hood with a long appendage; notably the executioner's hood. But that's another story.