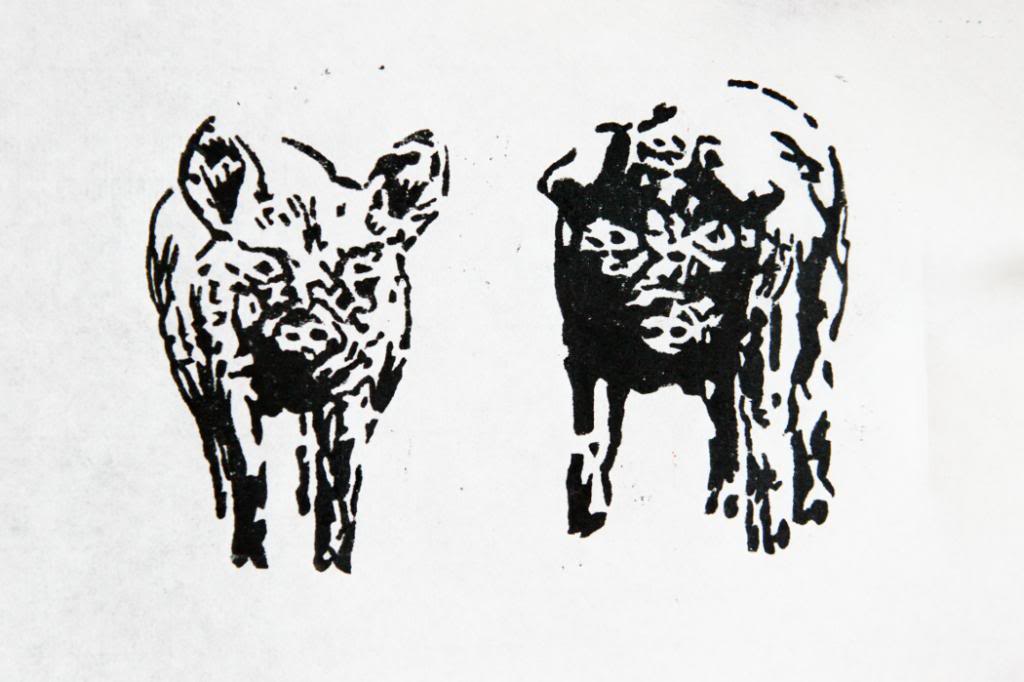 This is a small block, so some of the lines you see above are very thin. For this reason only a limited number of prints can be made before the thin linoleum lines become damaged.

---
There are around 5 million people, and somewhere around 20 to 30 million(*) pigs in Denmark. The pigs are bred by around 4 thousand pig farmers at an average of 5-7,500 pigs per pig farmer.

An estimated 10 million pigs a year are exported for slaughter. One source (one, that I've unfortunately forgotten the URL of) estimated that around 25,000 pigs die each day not from being slaughtered, but from living the life they have to endure. Apparently, slaughter-houses routinely discover marks from physical violence (hits with metal chains, wrenches, etc) on pigs brought in for slaughter. Related article (in Danish).

So, with 4-6 pigs per Dane it seems like a pig would be a common sight, but... can you actually get to see a pig? No, generally not. Most Danes never see a living pig in their entire life. The 5-6 million (less 4,000) Danish that are not pig farmers will never get to see even the smallest trace of these pigs alive.

---
(*) Note: 20-30 million is estimated total/aggregate per annum. Most sources say a bit more than 20 million, and some adds that 10 million are slaughtered outside Denmark. Quarterly figures are around 12 million. A pig that does not die "prematurely" are allowed to live for a full 6 weeks, I've been told.