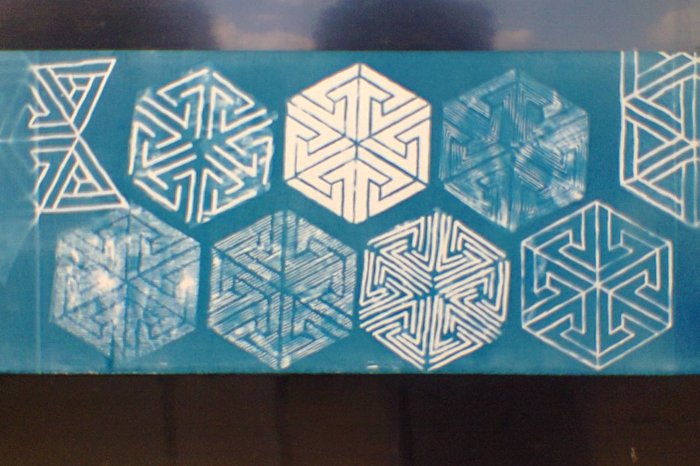 Test of Cyanotype, aka. Blueprint

These patterns were hand drawn on tracing paper which was then cut into small hexagonal pieces. These pieces then overlaid onto the blueprint solution impregnated paper and the patterns transferred to the paper using sunlight.

The patterns above had two glass plates on top, one directly on top and one around 1cm above the print. The leftmost side of the leftmost pattern escaped the bottom glass plate and curled up slightly before it met the second glass plate. This accounts for the colour difference: Some sunlight reached the photo-receptive paper below the tracing paper used for the pattern, developing it so that contrast was reduced.

The vertical light stripe running right through the leftmost pattern was caused by the edge of the first glass plate (the one directly on top). Edges of glass block the sun rays, hence leaving imprints on the photo sensitive surface. The same effect can be observed rightmost.

The hexagonal patterns had been attempted printed before, on a paper on which the photo sensitive solution had not quite dried up yet (no photo atm.). This caused some solution to be soaked up by the paper the patterns were drawn on, partially covering the patterns and making them unregognizable in the first print.

In this second print the solution had dried up both on the intended paper and on the hexagonal tracing paper samples. It seems it let through more sunlight this time, although some of the fine-line patterns are still unclear.

The pattern below was exposed under a single acrylics plate which was moved unintentionally a few time during exposure. Also the plate was not directly on top of the paper due to different types of objects sharing this test print. This accounts for the blurry effect. 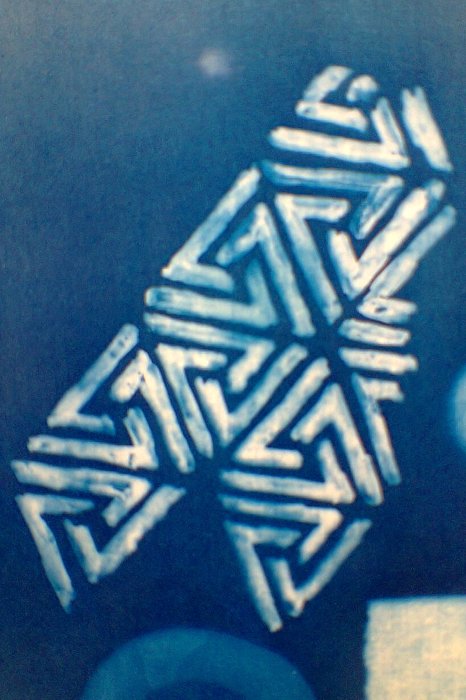 This pattern is known from several contexts. The earliest samples I've seen are from the Japanese as well as the Arab cultural sphere. It is quite possible that this pattern was originally "invented" or "discovered" in multiple places, independently.