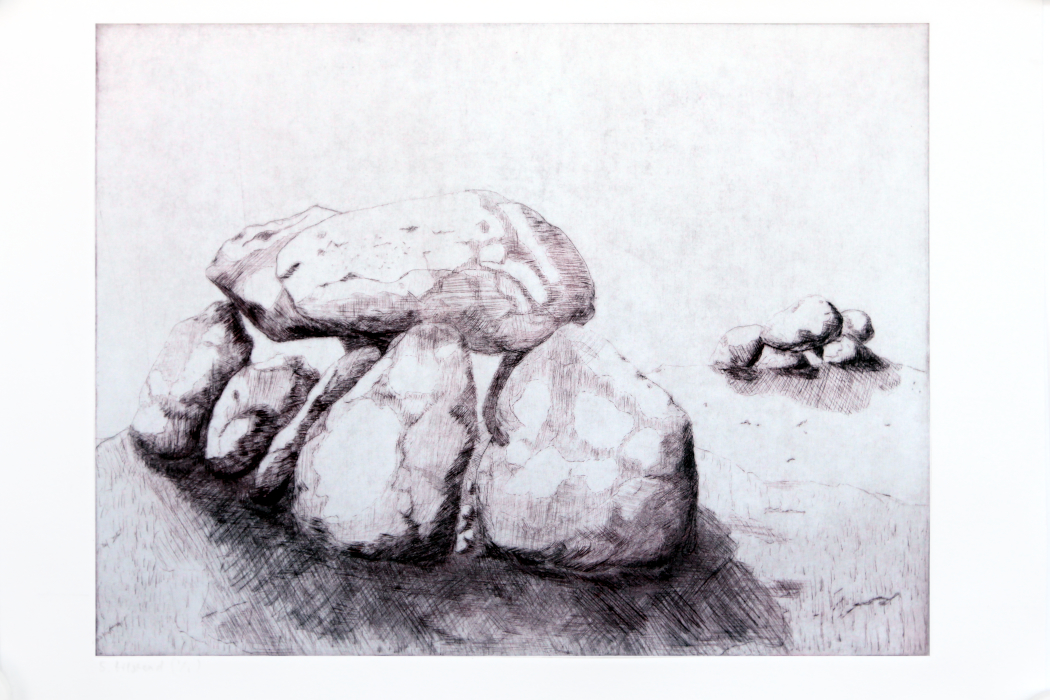 I am making a print similar to this watercolour, only using a real dolmen/passage grave as my model. In this post I will detail the complete process from idea to print. This post will be updated as the process evolves.

The idea for this was very clear: I wanted to create a scene featuring a dolmen. Archaeologists estimate that in the past we've had at least 30,000 dolmens in Denmark alone, scattered all across the landscape, and no less than 80,000 mounds. They are estimated to be around 5,000 years old. Now only a few thousand have survived. The rest disappeared due to agriculture: for centuries peasants have simply plowed down the mounds and removed the stones in order to sow crops there.

I did research on the Internet, doing image searches to find the right dolmen. The Kongsøhøv "dolmen" fascinated me because it was very large for a dolmen and had two capstones, which is unusual. Dolmens usually have only one.

It turned out that this is not a dolmen but (the remains of) a (former) "Passage grave". Next to this particular specimen archaeologists have found buried urns with burned skeletal remains. While the burials are dated 1100-501 BCE ("Bronze Age") the passage grave and the mound is much older, officially dated to 3950-2801 BCE ("Stone Age") - which means that this "passage grave" is not a grave at all. 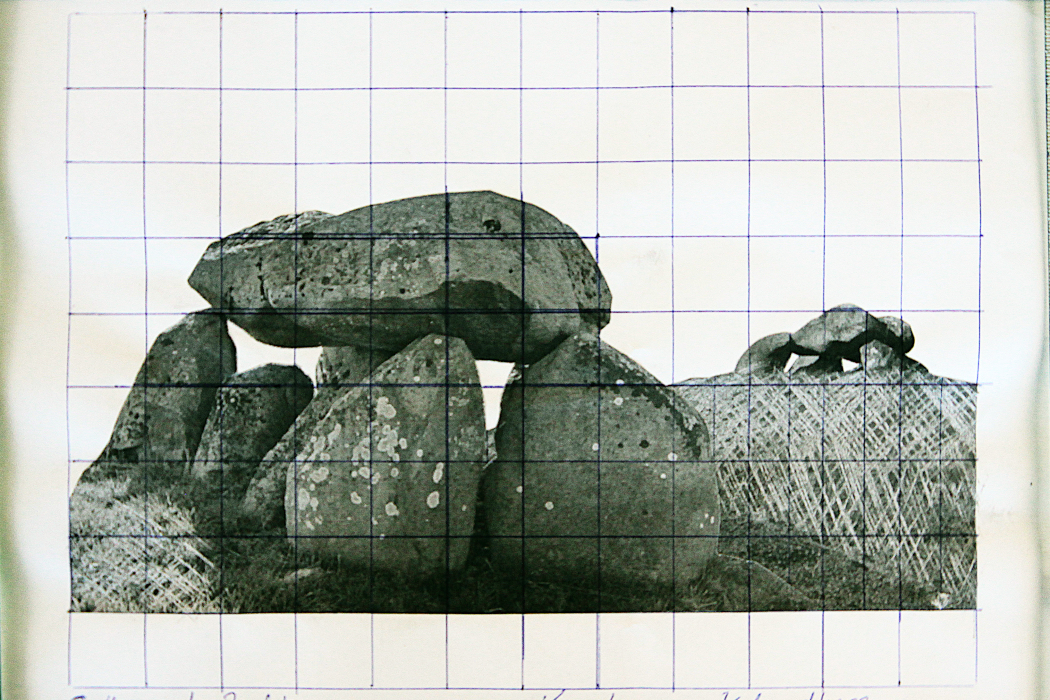 The photo above is a collage. It was made using two different photos of the Kongstrup Passage Grave. The photos may be found here. A sincere thank you to Torben Kristiansen, the photographer. The grid overlay is 2x2cm.

I chose to feature two views of the monument, as seen from different angles. This act is intended to mimic the typical Stone Age-to-Bronze Age landscape of Northern Europe (and large parts of Southern Europe too). Dolmens so close and so many that from one you would generally be able to see the next one.

I made one significant omission: Trees. In the stone age, and all the way up to the Bronze Age trees would be all over the place. Land was more or less synonymous with forest; open land would be the exception and not the rule.

The reason is artistic/creative - the idea is giving the impression of a "chain of dolmens", or at least "a multitude of dolmens", without actually featuring a lot of dolmens. To best illustrate this the dolmen("s") had to be be the most numerous, or the most dominant, objects of the scene. To add trees I would have to add more dolmens meaning that it would become a quite complicated composition that would hardly illustrate the main point - the frequency/density of dolmens in the landscape, ie the line of view from one to the next. Here, simplicity of concept wins.

That said, I hate to omit the trees as they are extremely significant for any illustration concept dating more than a (few) hundred years. The current scarcity of trees in typical landscapes is a historical anomaly that has only existed for a very brief time (save for ice-ages). 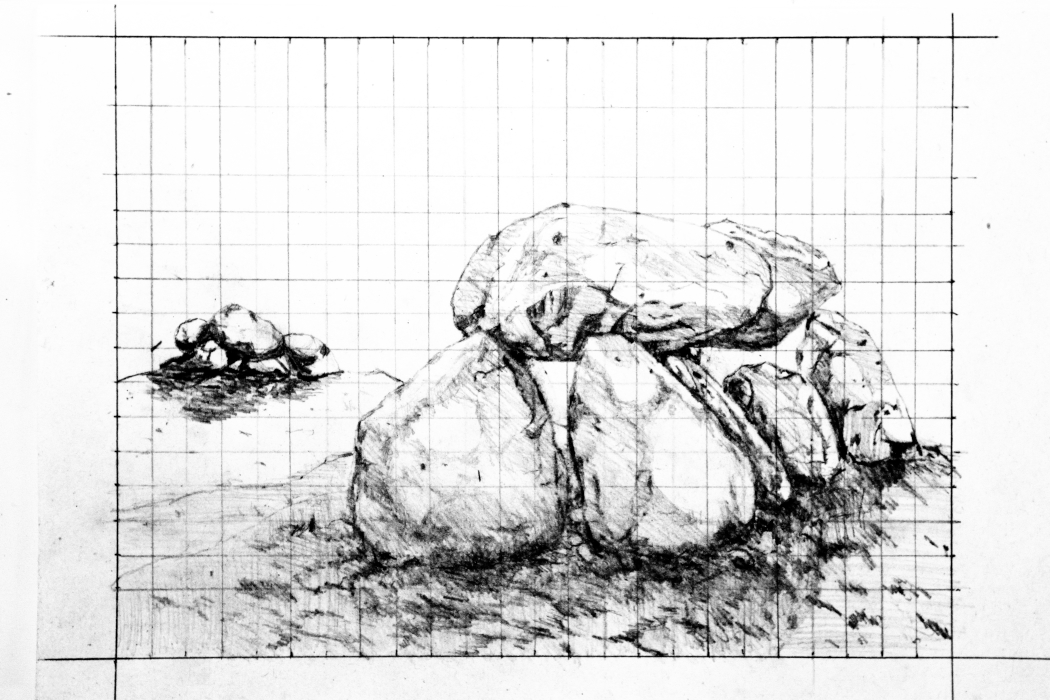 Next step is pictured above. A rather thorough pencil drawing using the grid lines to acheive very close similarity. Here, the grid lines have been doubled, the grid is now 1x1 cm.

As this is for a print the drawing neds to be mirrored before transfer to the printing plate. This was done by taking a photo of the drawing and flipping the photo electronically. 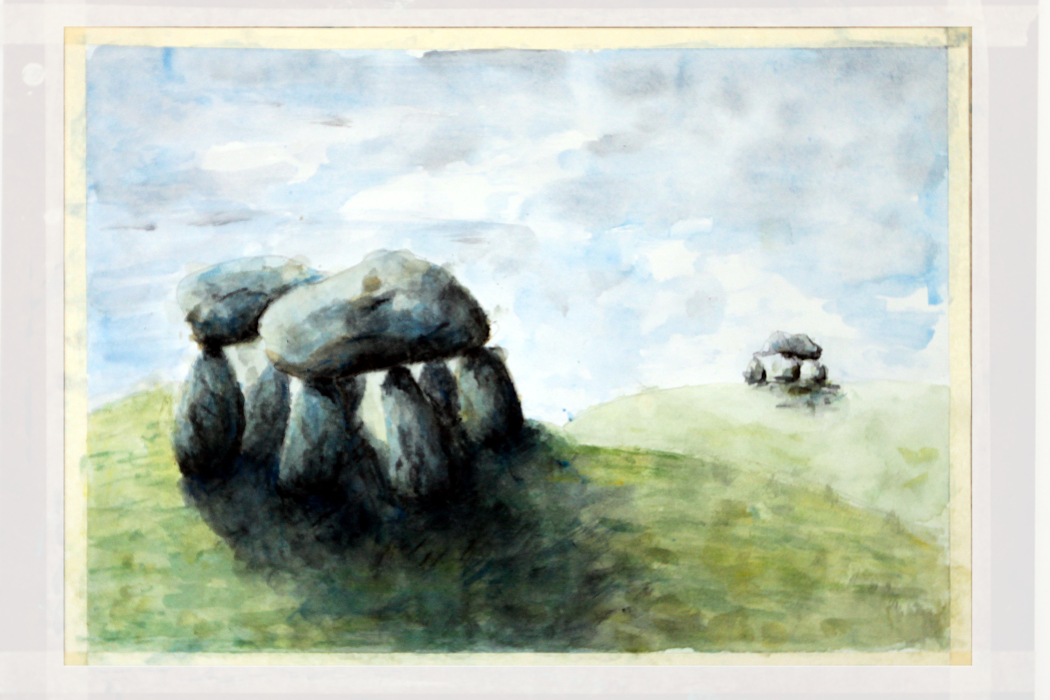 The print will be monochrome. However, I may want to make at least one print hand coloured, using watercolour.

To get a better feel for the tones and contrasts, as well as the strenght of the overall composition, this watercolour was made (note: this is not mirrored).

Please note that the shape, number, placement etc of stones on this watercolour is not right. I have these details exactly right on the drawing, I did not need to have it here.

The way this will be printed is by engraving the scene into a zinc plate. Technically this is called "Intaglio Print". 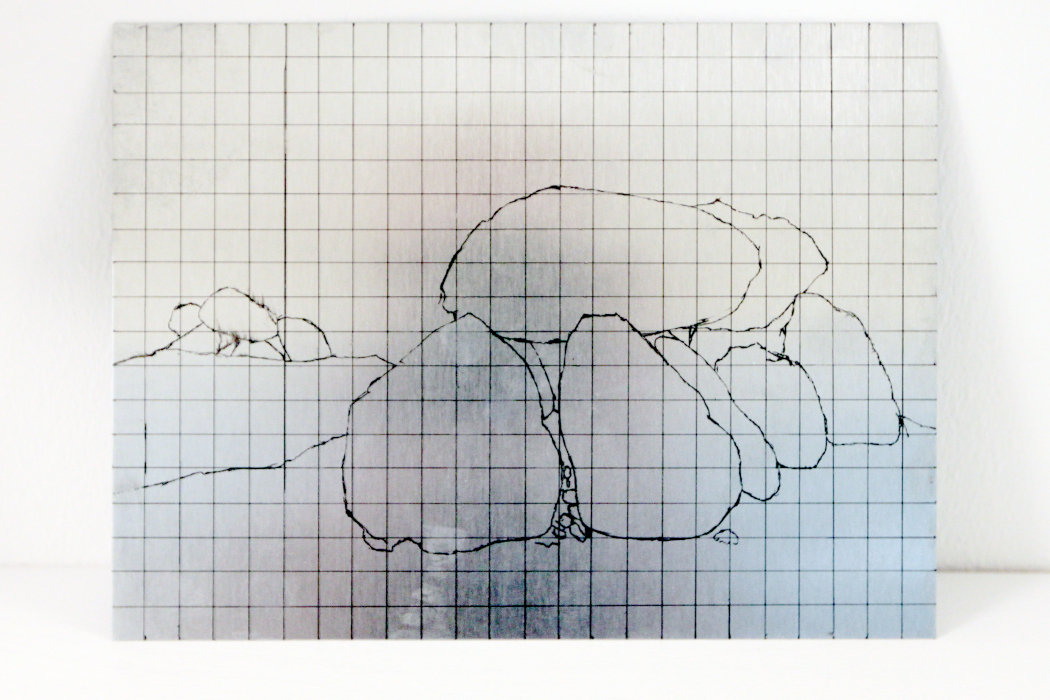 Above an outline has been transferred to the plate using a permanent marker. The outline has to be mirrored relative to the desired orientation of the finished print. 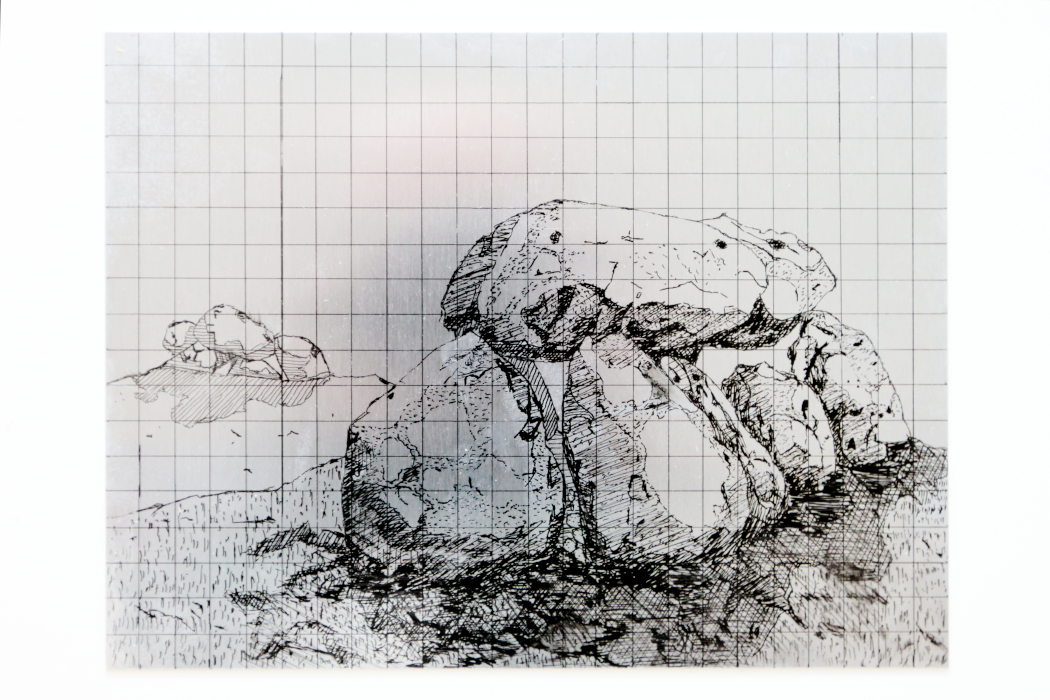 The purpose of transferring this much detail to the zinc plate is to make the engraving process (somewhat) easier:

When engraving in zinc the line is very similar to the surrounding plate and depending on light reflection, angle of view etc it will be more or (usually) less visible. IOW when you engrave you have very little control as you -- roughly speaking -- can't see what you're doing. So, a clear outline is a good help. Colouring the zinc plate entirely black before outset is another tip, however this would be useless here.

This is the pencil drawing from step 2, only it has been re-traced using permanent marker and the photo is no longer mirrored. 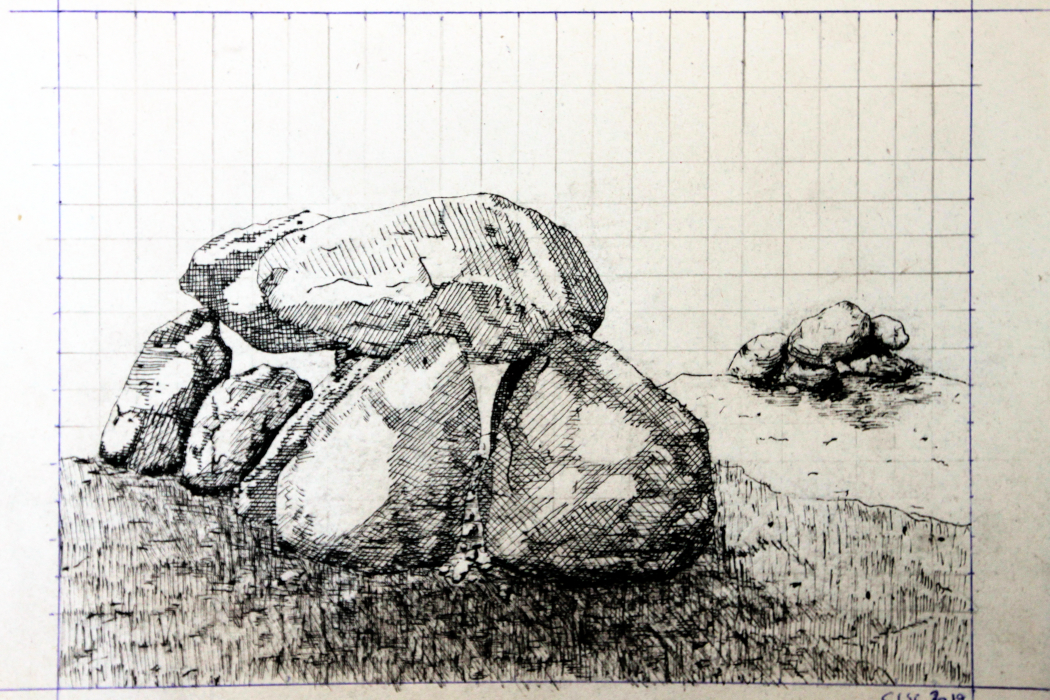 This re-tracing serves a dual purpose:

(a) to better preserve the drawing in case I should need it later on. At this point some pencil lines were already blurred or unclear; pencil wears off fast.

(b) to experiment with several types of hatching and cross-hatching, and hence different methods for producing the illusion of shape as well as distance, light, shadow.

The lines here are all 0.5mm thick and very homogenous black. An engraving will use very thin lines compared to this ("the tip of a needle"), and thicker lines as well. Also, the colour will generally have minor variations. So, this does not give an accurate impression of what the finished print will look like, in stead it gives a few clues that I can use in the engraving process.

At this point a few sittings @4-6 hours or more have been spent on this project, still the "engraving" part of the engraving process has not even started yet.

This is the initial engraving, ready for the first print. Colour has been applied and surplus colour has been wiped off so that the engraving itself is visible. 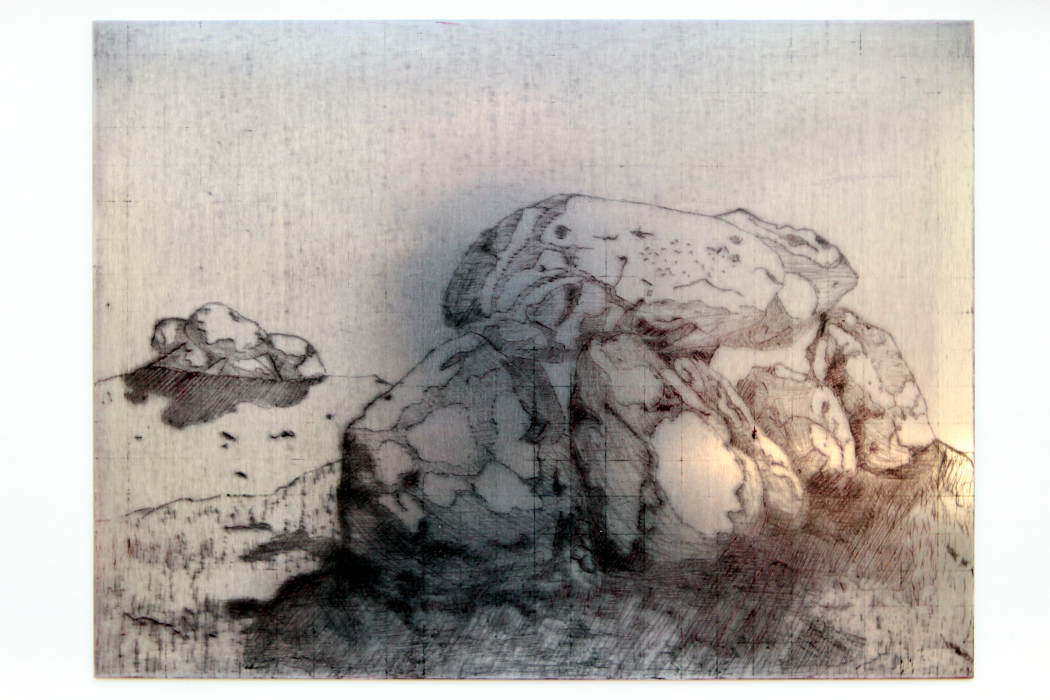 The first few prints will be used for control of the engraving and as kind of a baseline, correcting and modifying the engraving a little in-between each subsequent print.

These are the first two prints: 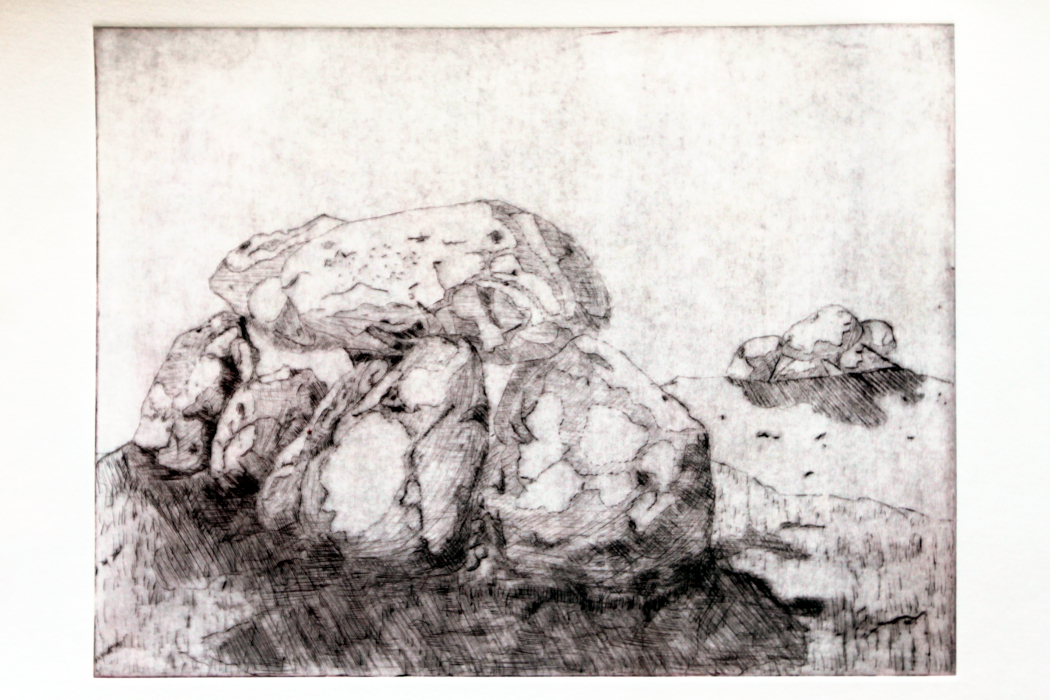 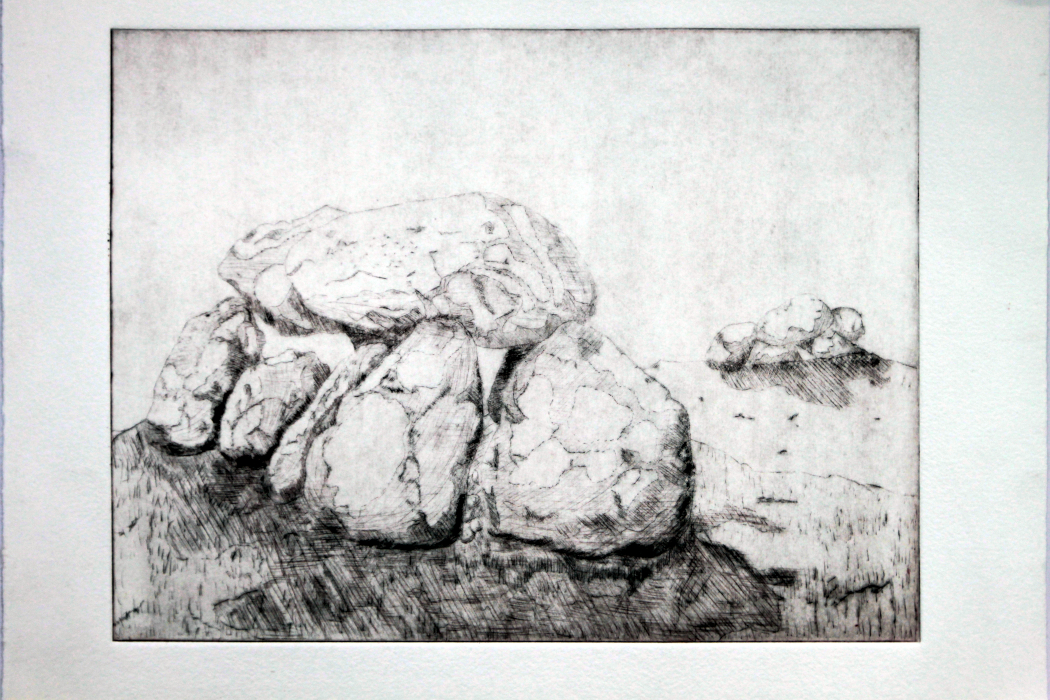 The colour of these prints (1,2) is "Van Dyke Brown", which is a dark red-ish colour. On the photo it appears as dark grey/black which it is not. The difference is due to bad studio light (no camera flash was used). The zinc plate has been further engraved between state 1 and state 2, but not much.

The iterative process of "engraving-printing-editing-reprinting..." makes it somewhat unclear which prints are "test prints" and which prints are "for real". Above, the two first prints have been labelled "test prints" but then these are still unique prints and while I, being the artist, may want to modify their look because I have this-or-that intention or preference any other person could find these perfectly fine for display.

For this reason the expression "test print" is usually avoided in professional jargon. In stead one speaks of states. First print is "state one" (for some, "state zero") and any subsequent prints taken without editing the plate are still "state one". As soon as the plate is edited the state number increases a notch and becomes 2,3,... This state number follows the plate: it increases only on edits to the plate. So, some states may have only one print while other states may have several.

(following this print, a "state 6" was made and printed twice. It is very similar to "state 5". The prints turned out to be less successful due to slightly old/hardened colour, so no photo yet.)